The secretive startup company, Magic Leap, made headlines recently with two stories of note.  First, as reported last week by UploadVR, Magic Leap is suing two former employees in federal court for trade secret misappropriation.  Magic Leap’s complaint alleges that Gary Bradski (Senior Vice President of Advanced Perception and Intelligence) and Adrian Kaehler (Vice President of Special Projects)  worked together for at least a year, while employed by Magic Leap, to create and develop plans for a new company using “Magic Leap’s intellectual property and Proprietary Technologies” in violation of their various employment agreements.  According to the complaint, while at Magic Leap, Bradski was involved in projects that involved “deep learning techniques for robots,” and that Kaehler was “responsible for the definition and development of technologies of certain projects, as well as the technical vision, staffing, budget, and ultimate implementation of such projects.”  The complaint further alleges that Bradski “disclosed Magic Leap’s confidential information and trade secrets to third parties and specifically misrepresented to third parties that such confidential and trade secret information did not belong to Magic Leap.”

Magic Leap’s complaint is noteworthy in that it asserts trade secret misappropriation claims under the new federal Defense of Trade Secrets Act (“DTSA“), which was signed into law by President Obama only a few weeks prior to the filing of this suit.

Although the details of the allegations are somewhat vague at this point, more information will likely come to light soon.  Because the complaint also asserts trade secret misappropriation claims under California state law, Magic Leap must identify the trade secrets which were allegedly misappropriated with reasonable particularity pursuant to Section 2019.210 of the California Code of Civil Procedure. 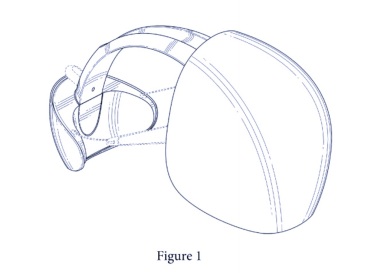 In less contentious news, it was also reported in the past few days that the USPTO had issued a design patent, US D758,367, to Magic Leap for a Virtual Reality Headset.  The design patent contains eight drawings (one of which is shown to the left) and was filed on May 14, 2015.

“This is part of our R&D and experience validation, and is not at all representative of what our product will look like. Items that any company patents can be helpful to the entire process, regardless if they end up pursuing that path or not.”

So it appears that Magic Leap’s product will continue to remain a secret for now.

One thought on “In the News: Magic Leap”