As reported by various news outlets today, Samsung announced an unprecedented recall of the Galaxy Note 7 just weeks after launching the smartphone due to the phone’s battery, with some scattered reports that “the cell can explode while charging.”

In a bit of irony, yesterday, the USPTO published Samsung’s patent application for a HMD having “a heat radiator” for removing heat from the space between the display and the optical assembly while a smartphone is actively engaged.  The device in the application appears to be a version of the Gear VR, with which the Galaxy Note 7 was designed to operate. 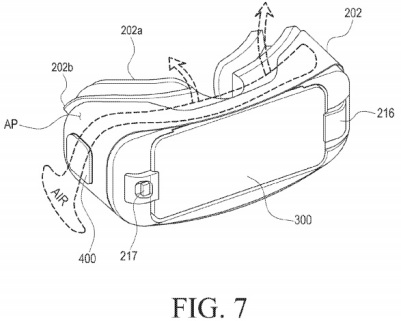 Samsung’s application also discusses using a heat diffusion member that can be installed to more efficiently transfer heat from the smartphone to the air in the frame 202. The heat diffusion member may be a graphite sheet, a heat transfer member containing carbon such as graphene, a metal member such as a copper sheet, or a heat transfer member such as a heat pipe or heat sink.  The application makes no mention of fire suppression technology.