A key distinguishing “feature” of the Vive, a virtual reality system jointly developed by HTC and Valve, is room scale technology.  Room scale allows a VR system to track a user’s position within a physical space through the use of “lighthouses” placed in the corners of a room.  Room scale purports to create a more immersive experience, whereby a user can physically move about within her virtual environment.

The downside to all of this is that Vive users may run into walls … or worse.

Enter: Chaperone.  Chaperone is a feature of Vive, wherein graphical representations of physical boundaries appear when the user is about to collide with a wall. A recently published patent application reveals Valve’s attempt to patent the aptly-named feature to prevent such accidents (and perhaps avoid lawsuits like this). 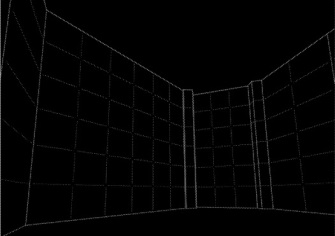 U.S. Patent Application No. 14/933,955, published on May 5, 2016, is entitled “Sensory Feedback Systems and Methods for Guiding Users in Virtual Reality Environments.”  The application is assigned to Valve, and claims priority to a provisional application filed in November 2014.  The application presently includes a single independent claim which recites, in part, “a method for warning a user of a head-mounted display of potential collisions with real-world obstacles.”  (The USPTO has yet to issue its first office action.)

The specification of the ‘955 application is an interesting read for VR enthusiasts (i.e., geeks) for other reasons.  First, for historical buffs, the application includes a photograph of an early HMD,

which could be described as “less-than-flattering.”

Second, to define a user’s physical “play” space, the Vive setup currently requires a user to physically walk around the edge of the room with a controller in hand.  The specification of the ‘955 application discloses defining the boundaries of the user’s physical space through the use of “lasers or ultrasound.”  Could this be a feature of Vive 2.0?

Third, the specification also describes the “teleportation” game mechanic that is presently used in two room-scale games: the Lab and the Budget Cuts demo.  This game mechanic addresses the problem of locomotion within a “virtual space” (e.g., spacecraft hangar) that is larger than the real-world space in which the Vive system is setup (e.g., your home office).  It will be interesting to see if Valve attempts to file a continuation on this game mechanic, especially in light of Alice and the Federal Circuit’s recent decision in In re Smith.

Finally, it will also be interesting to see how the claims of the ‘955 application will change, if at all, throughout prosecution, especially in light of expectations that Oculus will be implementing its own room scale technology in the near future.